The mystical planet of Pandora holds a very special type of iron ore so valuable that a permanent human settlement has been made just to extract the precious substance. As the mining operations delve deeper into the native lands of the local population, Jake Sully — a paralyzed space marine — is given a second chance in a cloned Na’vi body, so he can infiltrate the locals and help them relocate from an especially rich ore deposit.

Avatar is absolutely, gorgeously visually arresting. Watching Pandoras underbrush and floating mountains is like watching a Myst age come to life. The graphics by Weta are so well done that you completely forget (or consciously block out because you want to believe) that you’re looking at something that doesn’t actually exist.

James Cameron has clearly taken his inspiration from the backlit waterfall-and-scenery masterpieces found at your local pizzeria, not to mention classic rock cover-artwork. Which is great, because I totally love those things: 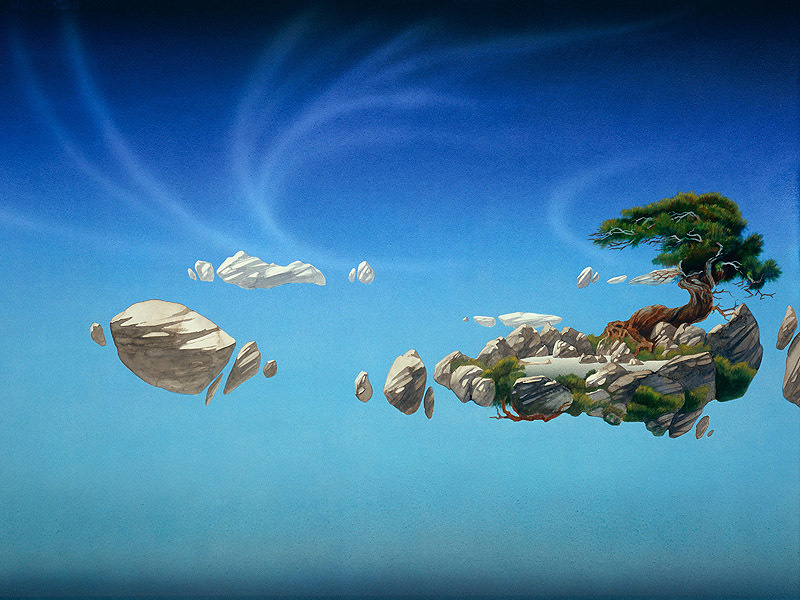 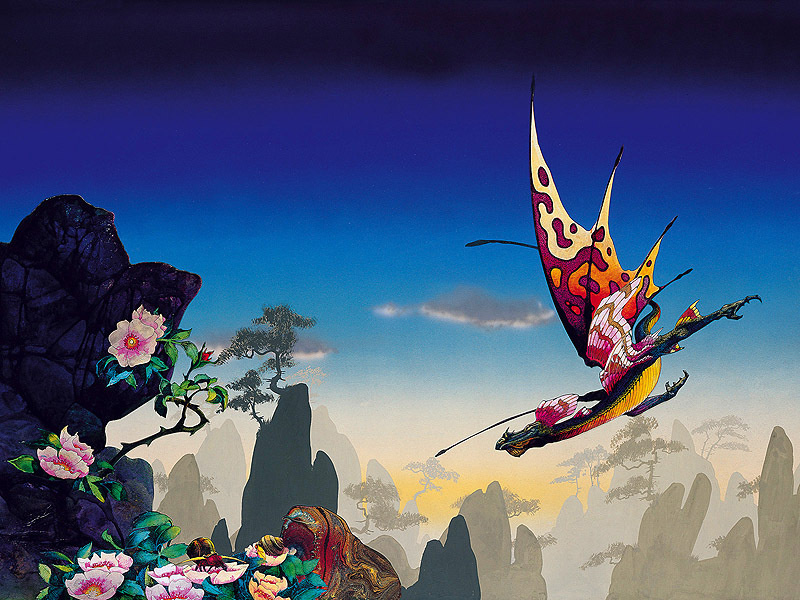 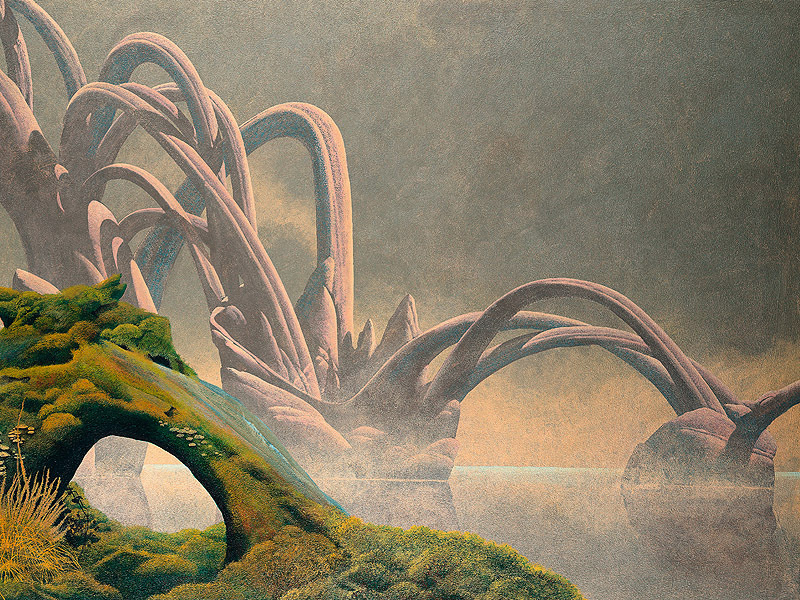 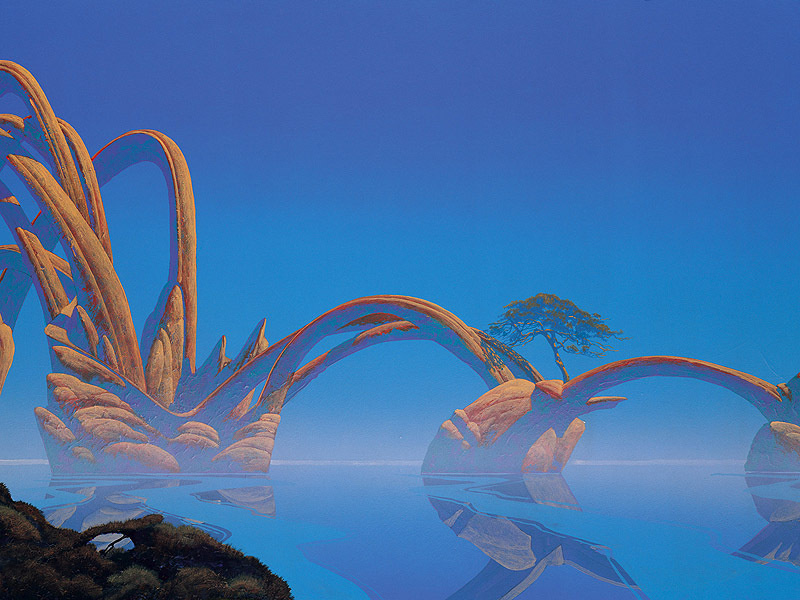 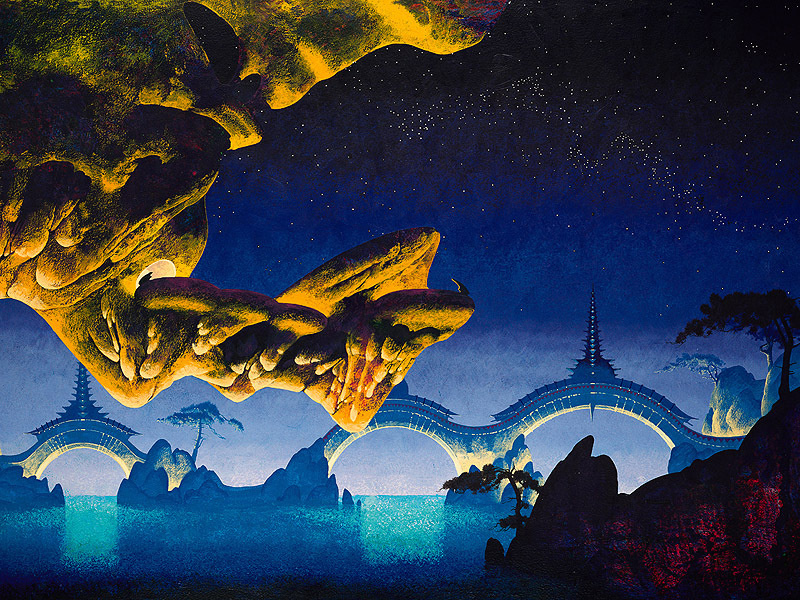 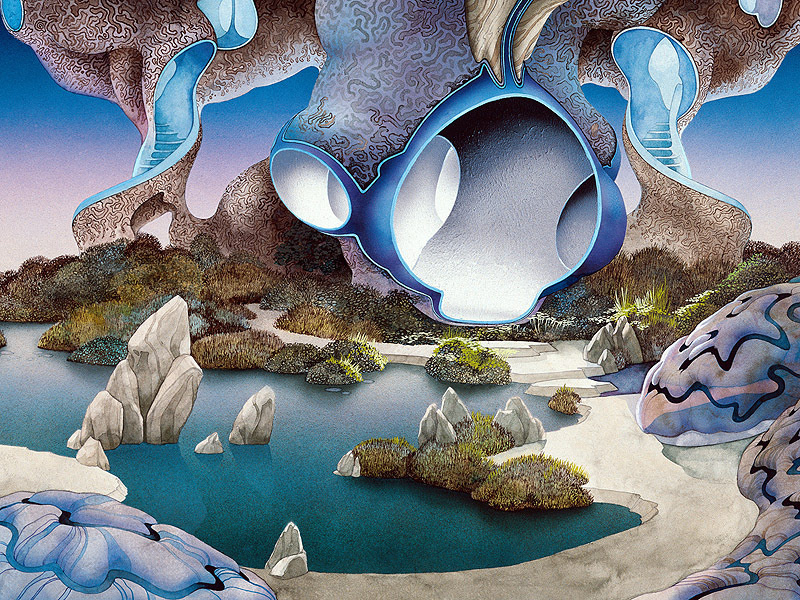 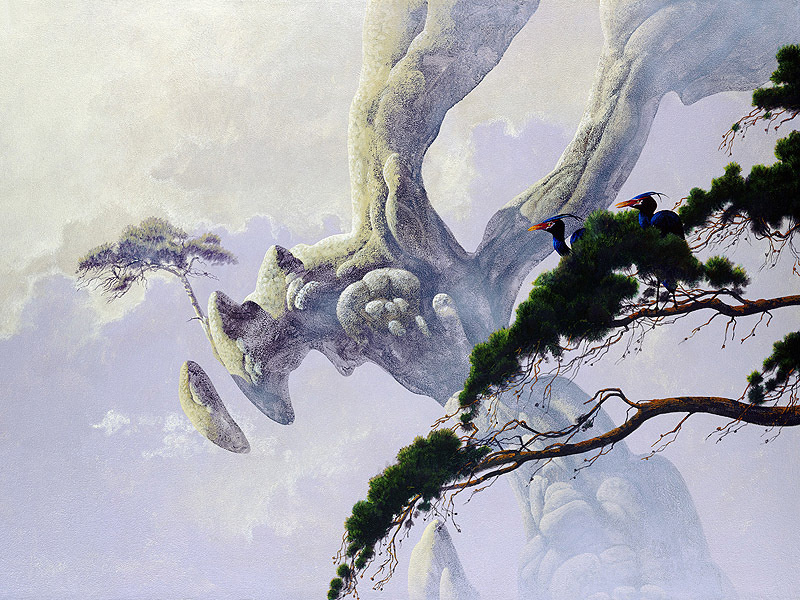 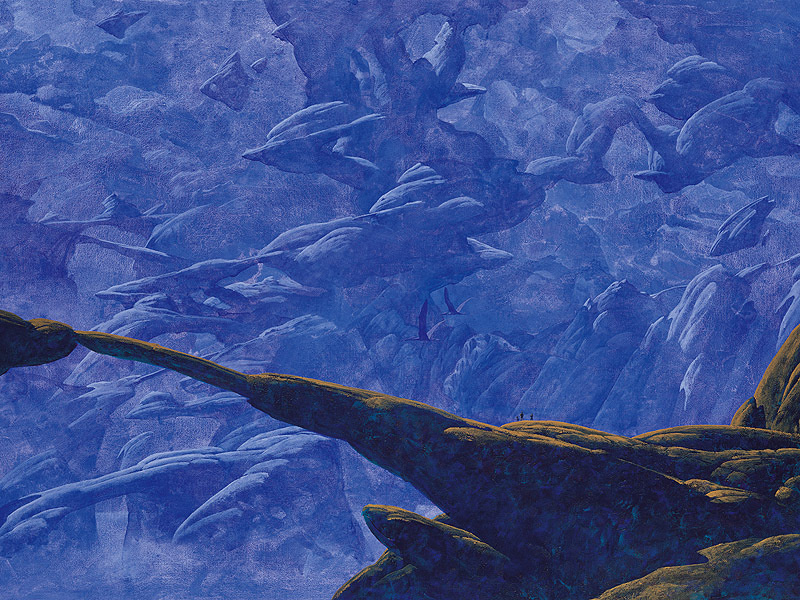 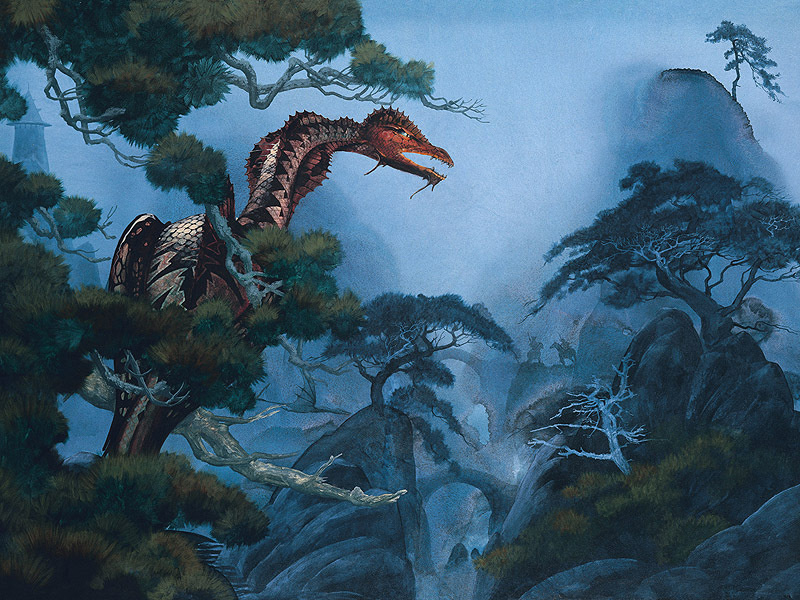 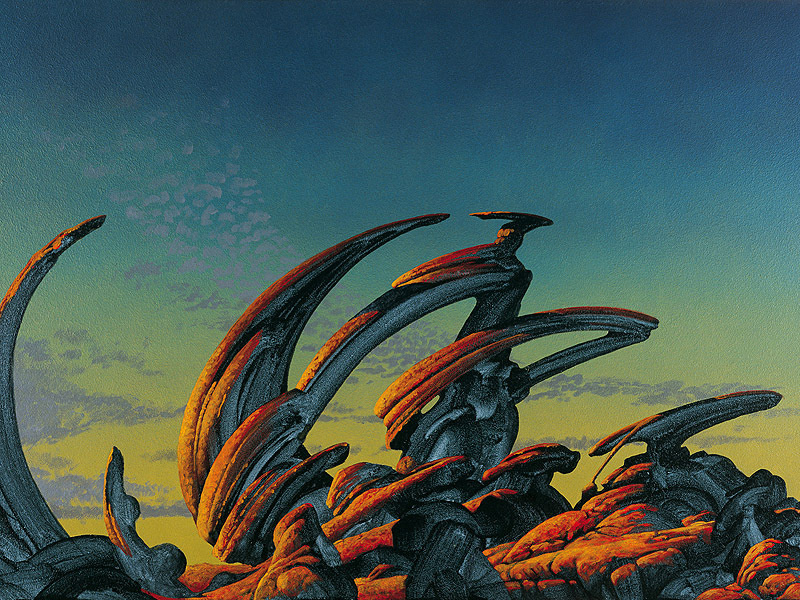 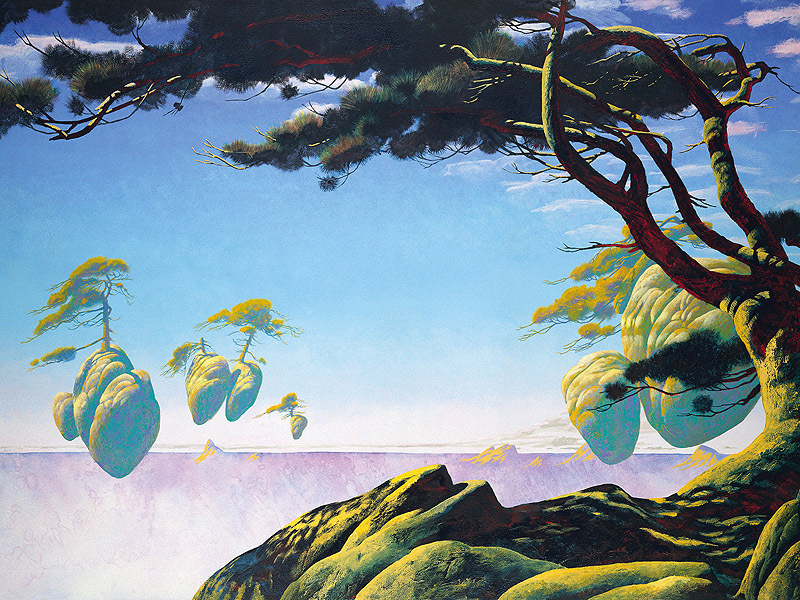 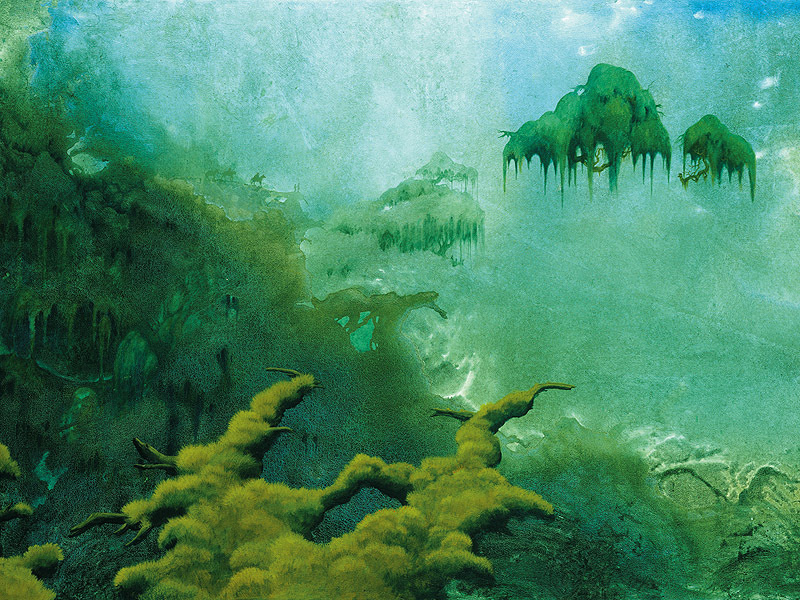 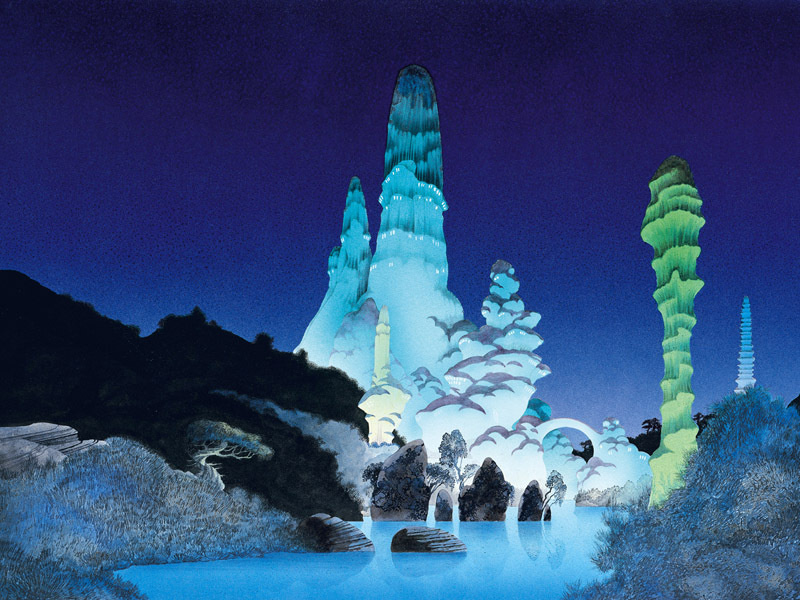 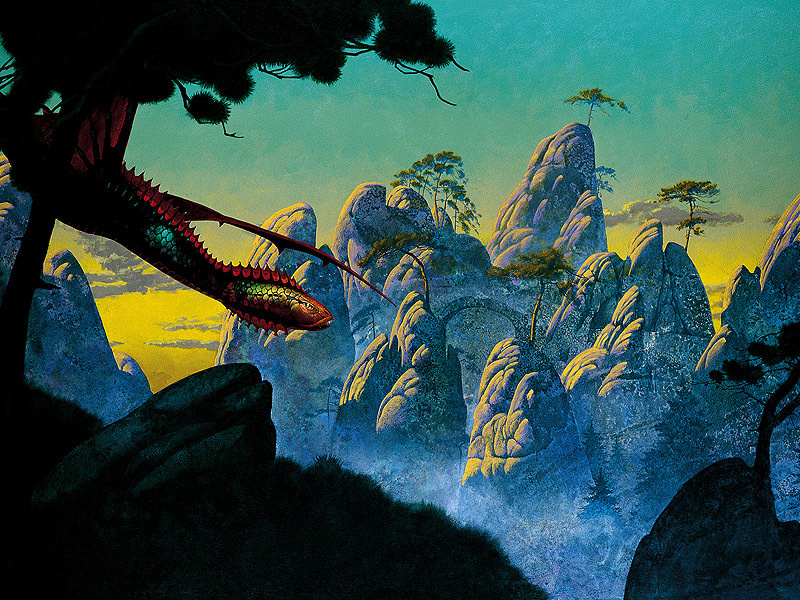 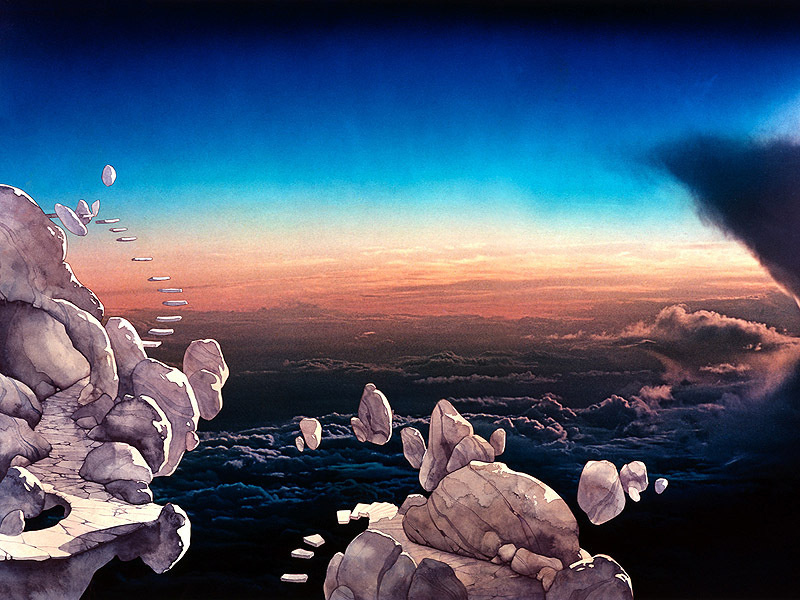 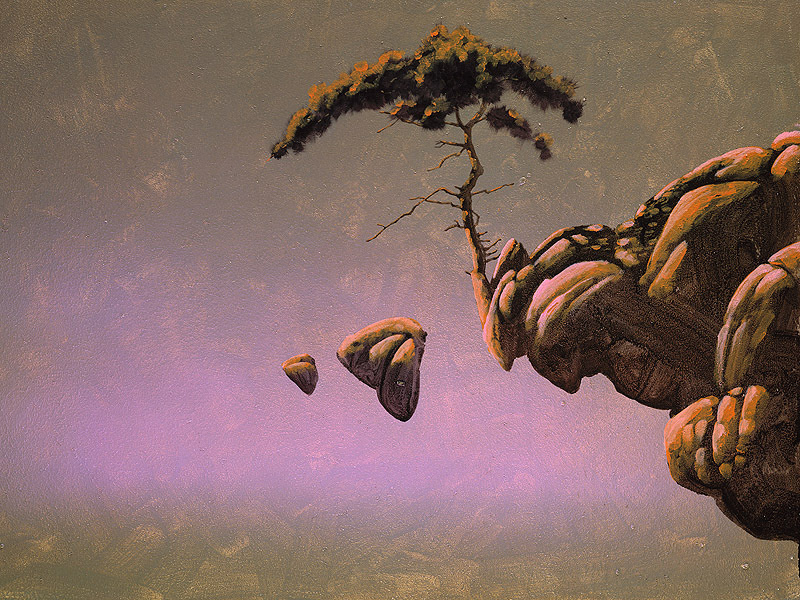 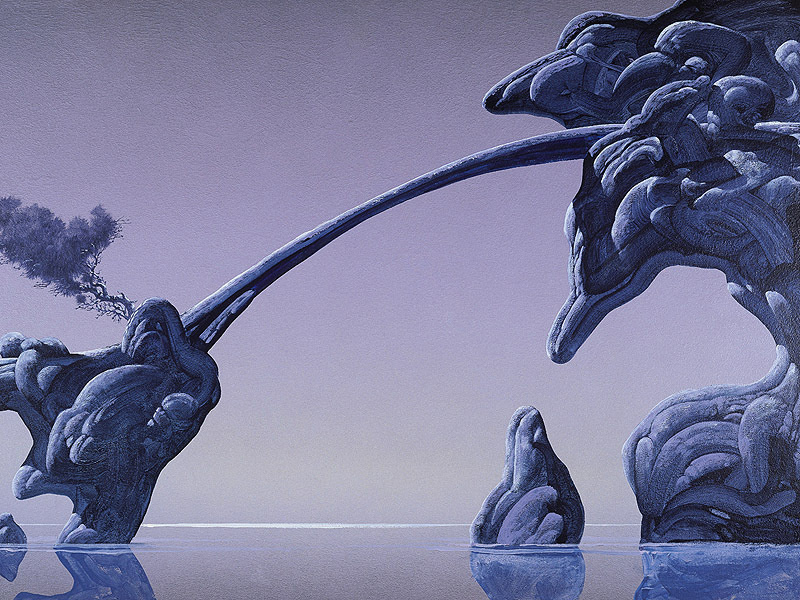 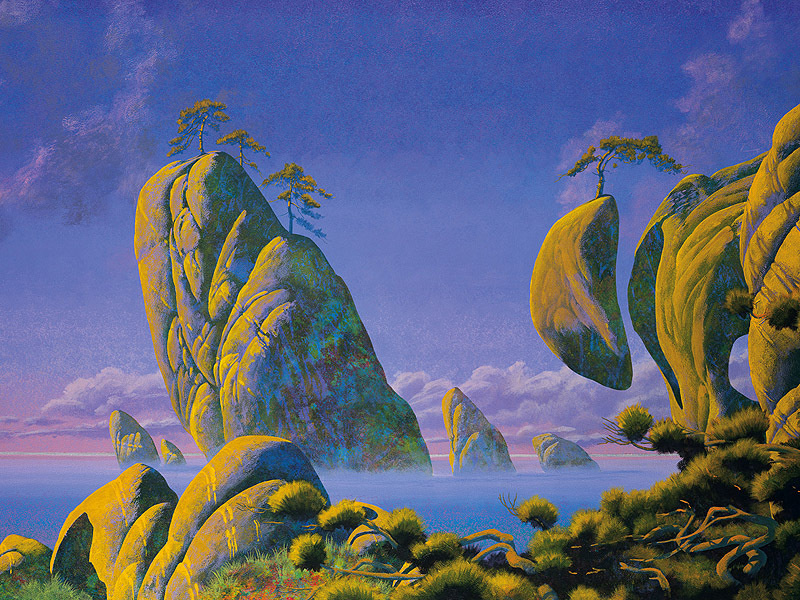 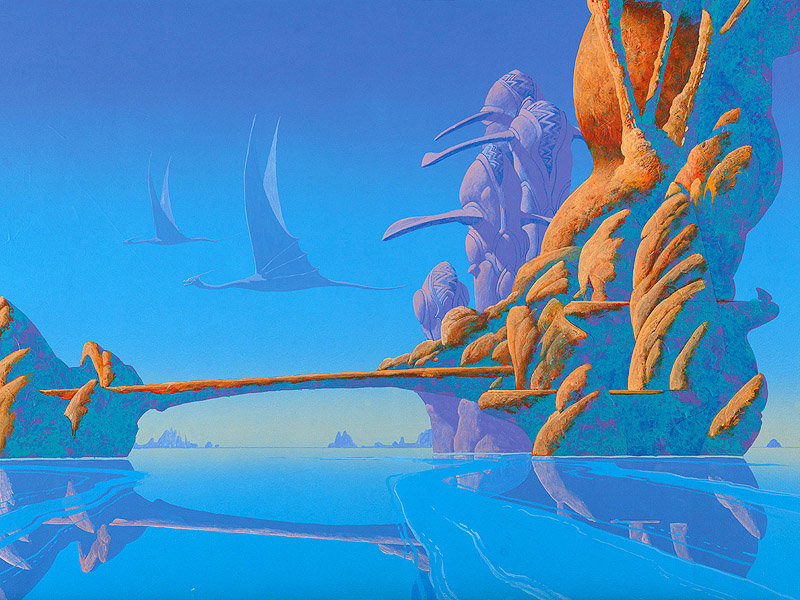 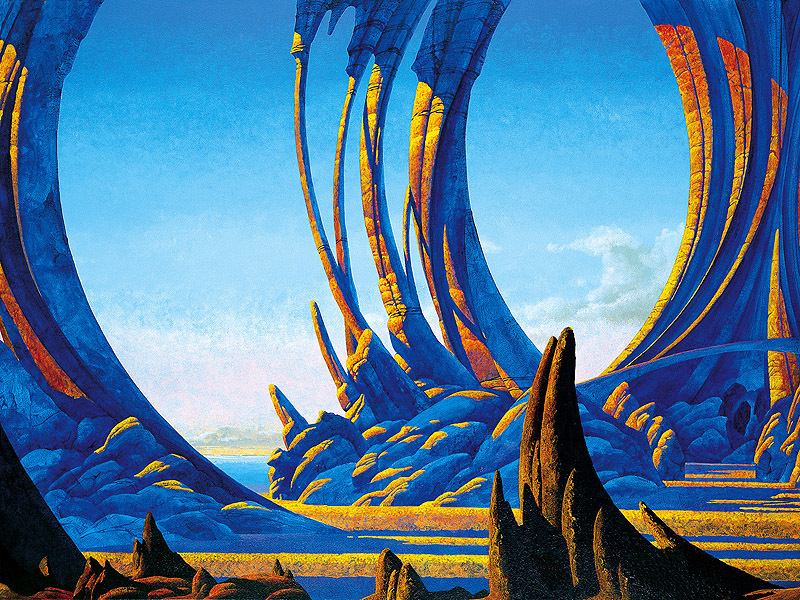 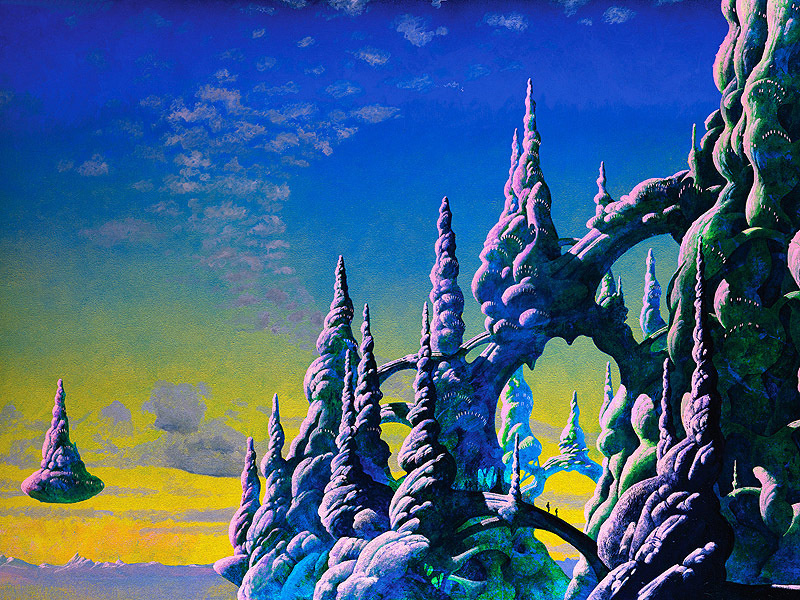 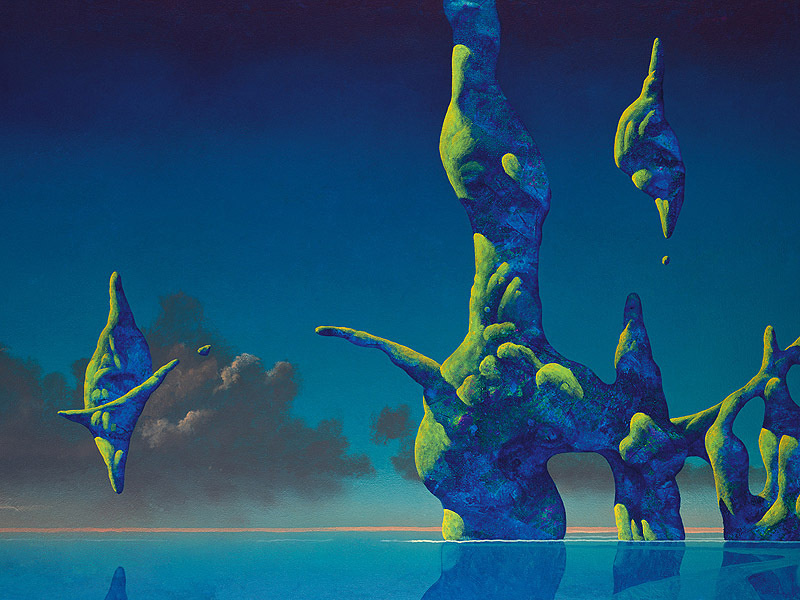 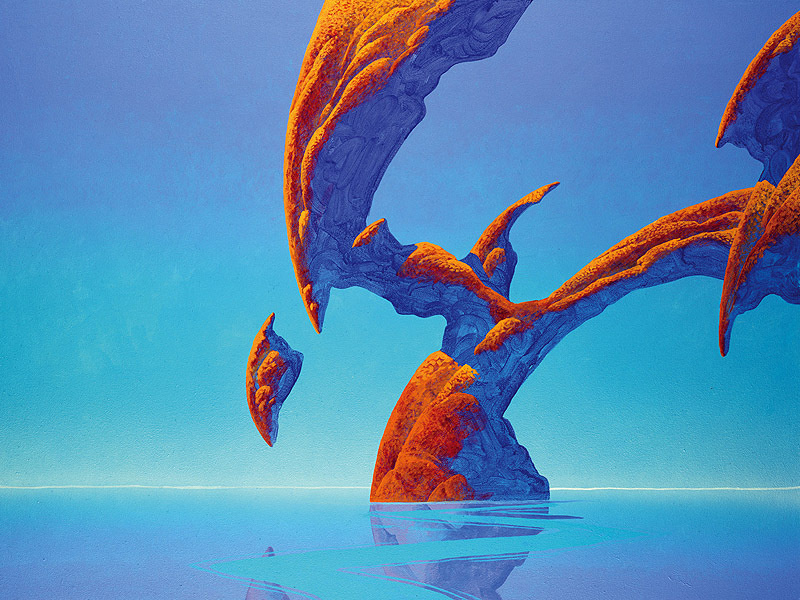 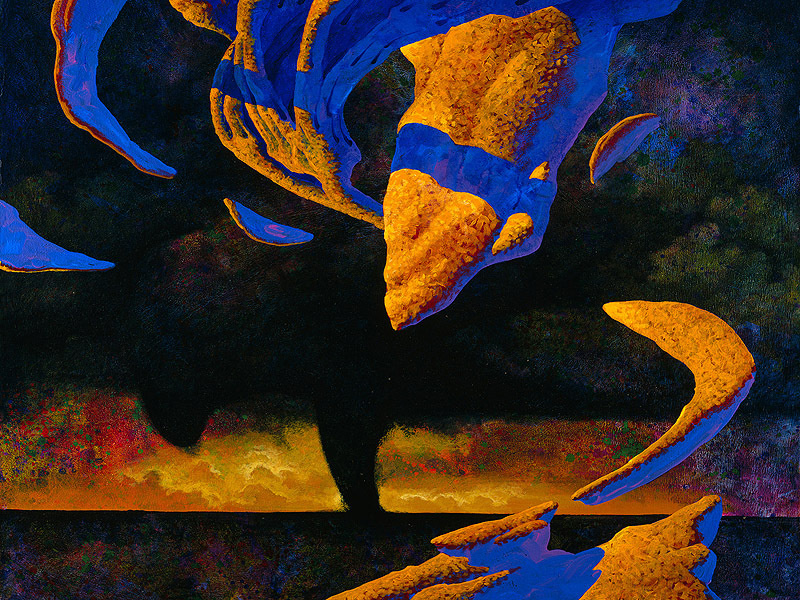 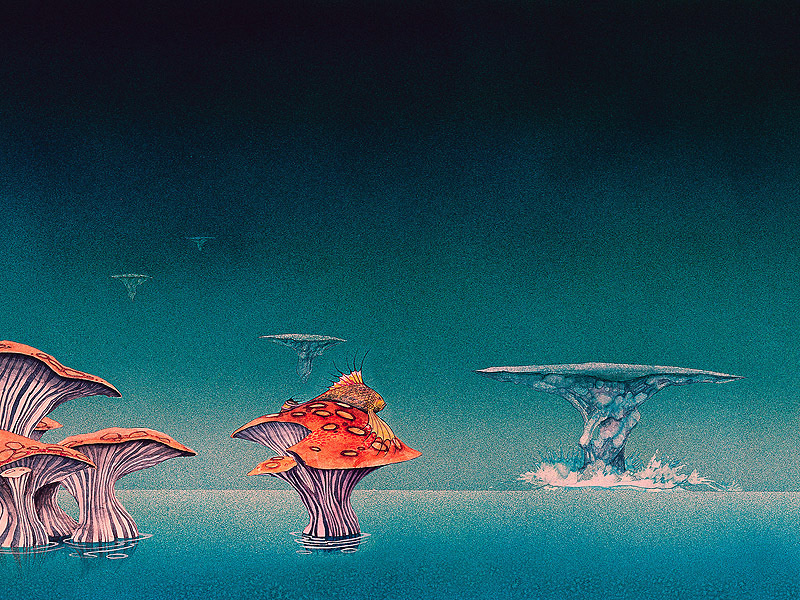 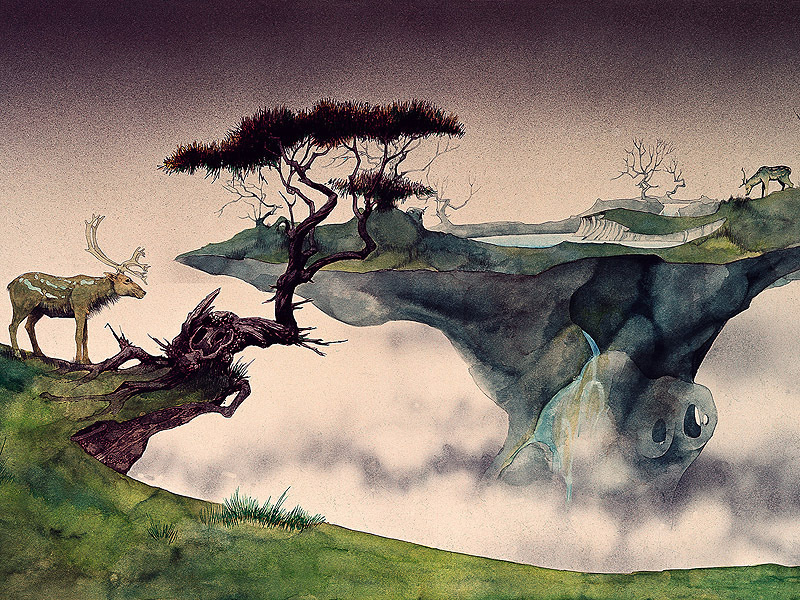 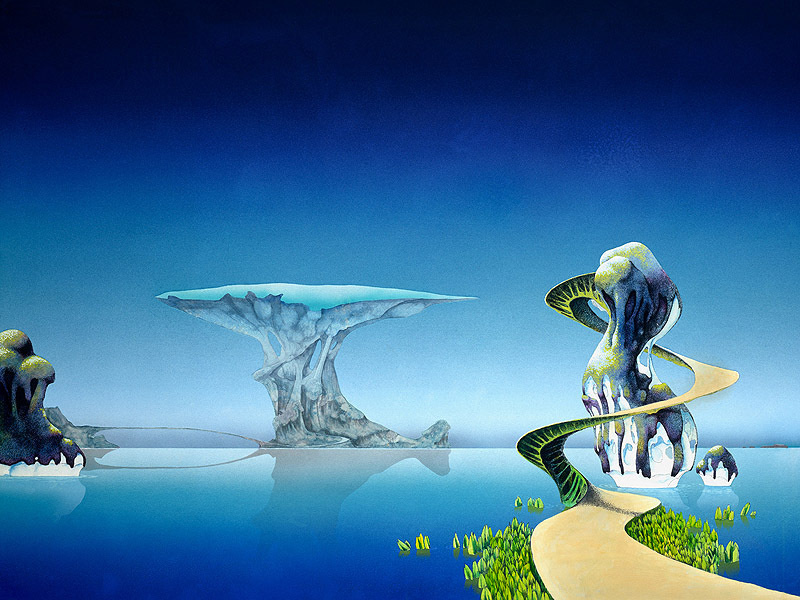 Images courtesy of io9 and the band Yes’ cover artist.

Avatar has been hailed and promoted as a cinematic game-changer; a paradigm shift in how we watch movies. Based on my single experience with 3D, it’s not. At this point, it’s important to note that the cinema where we saw Avatar seemed to have some old-fashioned tech-trouble; the curtains didn’t retract to cinemascope size until 5 minutes into the movie and the pre-movie-adverts were unfocused. That said, the 3D in the Pixar movie trailers prior to the movie were absolutely superb. Which leads me to believe the 3D in Avatar had its share of issues which I’ll try to deal with here.

First of all, it’s all very dark. You’re essentially wearing sun-glasses; which means for you to get a fully lit experience, the theatre needs to increase the brightness.

Secondly, there’s an issue of focus — not the camera-specific focus, but directorial focus. Take the jungle-scenes, for instance. Cameron clearly wants us to be looking at the main protagonists, so he keeps them in focus while any foreground leaves are focus-blurred. We’ve seen this in countless movies, but when suddenly those leaves are also projected into z-space, your brain tells you those leaves are right there, so if you — voluntarily or involuntarily — want to focus on said leaf, you’ll either be annoyed that you can’t unblur them by concentrating really hard; or you’ll get a headache. Because you see, that focus is not real, it’s burnt-in. Which presents something of a problem, because the film is the film and it can’t satisfy any angle or focus you — the viewer — wants satisfied.

Another oddity is the subtitles. By definition, these should be in front. So they’re given 3D depth. Which completely messes with your mind at the odd times when something in the movie, a character for instance, is placed closer to you in z-space than the subtitles, yet the subtitles are still “in front” at their lower z-depth. Some may not notice it, but my sensitive can’t-play-3d-games motion sick brain vomits at this logical conflict.

I’m sure these are tech issues. I’m sure that in a properly set-up, well-lit cinema the 3D is great. I’m sure that once projectors can churn up the framerate, camera panning won’t turn your brain into goo. I do, however, think that directors who decide to 3D their movies need to make difficult choices as to when and when not to use the z-space, meaning only when it adds to the film and not simply all the time. For now, I prefer gloriously flat.

Avatar is not a perfect film by any stretch of the imagination. Like all other epics out there, it’s a bit too long. It’s predictable and filled to the brink with stereotypical villains and clichés (I wonder why the planet is named “Pandora”, could it be because it unleashes hell when opened, like the box?). Cameron even copies himself on more than one occasion, mixing the story from Titanic with elements from Aliens. Add to that a lot of silly things, such as subtitles set the Papyrus font when natives speak to each-other, a design decision so excruciatingly dumb that the mind boggles.

But these are all trivial issues compared to all the other levels on which Avatar works. The story gets under your skin. Within long, the smurf-like natives stop looking goofy, their odd names, behavior and peculiar language starts to seem real and before you know it, you’re enveloped in a classic love-story despite it being set in a supremely alien world. Avatar brings sci-fi to the masses, and for that reason more than anything, I completely love it.