For the next 24 hours or so, I’ll be blogging about the results, the candidates and anything they’re going to throw at us in these desperate last moments. Why the liveblogging, you ask? Because quite potentially, 8 excruciating years are coming to an end. Because no matter what, history will be made by the first either black candidate or the first female VP to be elected. Because politics are exciting, and worth spending your time on.

I’ll be posting somewhat thought-out comments right here, at least every hour, and I’ll be chatting on Twitter. Join me in the discussion.

10:00: Just arrived at work the election headquarters. Very sad to hear that Barack Obama’s grandmother has died of cancer, just one day before the great day. I’m wondering whether this will have a positive, or negative effect on Obamas chances. I’m leaning towards thinking it’ll make him look more human, as if that was even needed.

10:16: I honestly think Obama can win, which is why this is exciting, but two things worry me. On one hand, there’s a minority of idiots, who think the country is “not ready for a black candidate”, idiots that say one in polls but vote for the other guy in the privacy of the booth (the Bradley effect). The other thing is teenagers staying at home and playing Fallout 3, thinking Obama has a huge lead in the polls anyway. Get off your ass!

11:01: The first results are in. Obama wins Dixville Notch in New Hampshire by a landslide. 15 votes for Obama, 6 for McCain.

11:46: 270towin.com has been thrown around in the media, favoring Obama in most configurations. What the site fails to depict, is the fact that for Obama to win, you have to actually vote for him.

12:20: I’m told it’s raining in the swing state of Virginia, and how rain may keep undecideds home.

13:44: The danish media has been covering the US election as much as, or even more, than danish elections. While the bias is less evident than it is on, oh say, Fox News, most danish media leans strongly towards Obama.

14:37: Obama votes in Chicago. He doesn’t seem to be standing in line, though. As much as I adore seeing a black man voting for—I would guess—himself, in a country that used to enslave his kind, I don’t think presidential candidates should be allowed to jump ahead in the polling queue.

14:47: The journalists at CNN discuss whether Obama shows signs of sadness at the passing of his grandma. To their credit, however, they show some taste and notes that Obama is a man in control of his emotions, referring to his steady handling of the financial crisis so far.

16:23: An odd piece of reporting. Obama, the city in Japan, is holding a Obama for Obama party, featuring hoola dancers.

16:30: “If you never vote, you’ll never know what difference you could have made”. Said by a blogger and mailed to CNN. Very apt, especially considering how close Florida has been these last two elections. So GO VOTE!

16:38: Bill Ayers, the infamous terrorist Obama “palled around with” was apparently in line to vote right before Obama. What are the odds.

16:47: McCain, about to vote in Phoenix Arizona, has a busy schedule today, speaking in several battleground states. As much as he’s had his age of 72 against him, you’ve got to admire such a travel schedule. He must have his stash of high-caffeine soda pops packed.

16:56: A danish newspaper has collected links to the most embarrasing events in US election history: Bush Sr.’s freudian slip, Joe Biden asks a wheelchair-bound man to stand up, Bush tries to escape press conference through a locked door, McCain tells Western Pennsylvania what he thinks about them and finally, Sarah Palin talking about the 700bn bailout.

17:19: Sarah Palin thinks it’s very cool about America that she can exercise her right to privacy, and not tell anyone who she voted for (as quoted outside of her voting booth).

17:26: Sarah Palin has gone rogue! She keeps talking, and all the while I hear circus music playing. As my old grandfather said: silence is golden.

17:28: In the US, Google is showing a special election logo today. Lovely!

18:34: CNN now reporting that Obama has an 8 point lead over McCain in the latest poll of polls. That’s 1 point of the undecideds that went to Obama.

19:02: UserFriendly chimes in with some perspective.

19:30: The danish news coverage of the US election starts now, and results won’t even trickle in until 23:00 GMT.

19:53: Danish “pundits” are discussing the intricacies of Obama’s ideologies and comparing them to danish political parties. On the topic of capital punishment (which has long since been abolished in Denmark), they note that no US candidate could be elected without being for the death penalty.

20:08: The financial crisis defined/will define the outcome of the election. Or so the pundits argue.

20:43: Man, Joe Lieberman is a dick. Remember him on the Gore ticket in 2000? Now he’s standing right behind McCain. Now there’s a flip-flop for you.

21:43: CNN Europe is about to make the switch to CNN USA. The difference is more interface, more animated gradients, and more action. Coming up next: Wolf Blitzer, Unscripted! Now that’s an action name—Wolf Blitzer and his sidekick, Max Power.

22:05: What is it with CNNs new-found fascination with large touch-screens? You’ve had access to weather bluescreens for decades. They’re much more fun.

22:20: Wolf Ad-lib Blitzer and the US CNN has taken over the European TV screens. Whenever I see Wolf, I’m reminded by a computer virus scourge a while back when Blitzer, asking one of his experts, asked if the virus was so bad that people should turn off their computers and move away from their keyboards until a solution was found. No Blitzer. No.

22:33: CNN are about to show the first exit polls, following new laws to postpone them until … well, at this point in the US day. Danish television predicts a president elect can be decided already at 02:00 danish time. That’s less than 4 hours from now.

22:38: Framed pictures of Obama and McCain in the background of a danish television debate reminds me of a fun difference between Danish and American party colors. In Denmark, the conservatives are blue, and the liberals are red.

23:07: CNNs first exit poll places “The Economy” as the number one topic of this election, mattering to 62% of pollsters.

23:17: Discussed with my sister the meaning of the word Liberal, and how McCain is really the liberal of the two candidates; liberal meaning less government and focusing on individual liberties, exemplified for instance with McCains promise of 5000 bucks so you can choose your own healthcare.

23:31: Another CNN exit poll states that terrorism was the most important topic of the election for only 9% of Americans, to which Rudy Giuliani responds: “we’ve lost our brand”. That’s good! All we have to fear is fear itself.

23:45: Pundits discuss the historical significance of electing a black president and hope it “closes a chapter, a stain in American history”. Certainly I hope the inauguration will be not only for the president, but for an era of colour-blind can-do attitude.

23:59: Only a few minutes until the first polls close. Danish television discusses how McCain has changed from a moderate conservative to what he is today, someone who tried to unite what he thought was his republican base by appealing to the Bush supporters, the religious right with Palin and so on. It’s so sad. I really used to like him.

00:34: Results from Indiana and Kentucky are trickling in. Right now Indiana looks slightly democratic, which, if Obama carries it, will be a first in decades. Indiana has been red in the last ten elections.

00:43: The girlfriend asks why the election is on a Tuesday. Well thanks for asking! That’s because all the farmers have to get all the way to the county seat, by horse, spend an entire day voting, and then spend a day traveling back to their farms in time for the sabbath.

01:16: Wow, this is stupid! CNN is showing a fake hologram projection with asteroid field interference flicker and everything.

01:33: This is nervewracking. 1% of Florida counted gives McCain a lead. 2% counted up, and now Obama is in the lead.

02:02: Wow, the exit polls! With the polls closed, CNN is apparently allowed to reveal their exit poll results. If the margin of those results is large enough, they project a win for either candidate. Right now that gives Obama a favorable 77 electorals vs. McCains 34.

02:10: CNN points out that McCain is under performing Bush in rural areas, something which could carry states like Virginia for Obama which is performing very well in the suburbs. Put simply, McCain still has a farmer majority, but the margin is far narrower than it was in 2004.

02:42: Finally, CNN projects that Pennsylvania goes to Obama. This has been touted as a “must-win” state for McCain if he wants the magic 270 electorals. That means it bodes very, very well for Obama. So well, in fact, that I’m going to give in to my waning strenght and hit the hay. See you in 6 hours or so.

08:26: Woke up after an erratic nights sleep, only to find that Barack Obama is, in fact, president elect. Not only did he win, he won Ohio, Florida, Virginia. 338 electorals over McCains 160. A huge victory. It’s going to be such a historic moment to see the Obamas move into the White House January 20th. The real bad guy here is George Bush, and I can think of no-one better to kick him out.

08:36: Trying to find out whether the Senate has been decided yet. CNN shows it as 40/54 in favor of the democrats. It would be nice for Obama to move in with a 60 seat filibuster-proof senate.

08:52: It’s such a pleasure to be able to call this the next president: 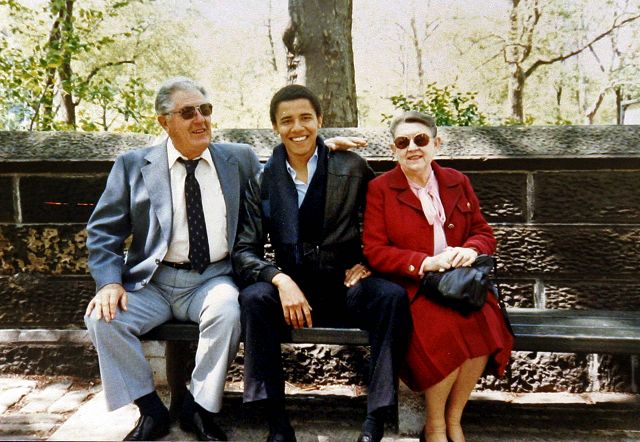 09:00: That ends my live blogging. It’s been a pleasure to follow this election with you. Good job America.